The work of Finn Theuws (b. 1997, Amsterdam) presents a visual language of personal memories and figure of speech. His work is based on the dynamic of his interpersonal relationships and the urgency to dissect the many aspects of ‘contemporary masculinity’.

He employs and reassigns materials and objects which speculate metaphorically (or even clichéd) on the different aspects and have a recognizable relation with the established properties of the masculine; with a focus on a non-normative social orientation. His practice includes and combines both organic material, such as carnivorous plants personating hegemonic behavior, and artificial objects, like a medieval chainmail covering a massage mechanism speculating on the history of forbidden sodomy. His work consists out of various media such as sculpture, installation and writing.

In 2021 he concluded his MFA at the Royal Academy of Fine Arts in Antwerp after finishing his BA Fine Arts at the Gerrit Rietveld Academie in Amsterdam.

The exhibited works speculate on hegemonic behaviors and social toxicity and its accompanying aftermaths within interpersonal relationships.

The focus of Take Two Leeches And Count Your Hickeys In The Morning lies within the contrast between a seemingly positive character versus its actual negative nature. The leeches represents the ‘other’, appearing to posses medicinal and kindhearted intentions, yet truly being parasitic and toxic. Reflecting on the associated consequences of being intimate with such another.

Whereas the cut off aloe vera leaves used for Pretty Hurts (let me put the water in the bowl for your wounds, babe), having healing and pure properties, present the ‘self’ as something ‘natural’ which is altered and excessively personified by the artificiality of the piercings; zooming in on the urge to enhance oneself for and to be acknowledged by a significant other.

As the cut off leaves, separated from it’s body, sit in glass vessels filled with water; the juices that drip out of the leaves give the water a blood-like color corresponding with a cut off the human body; a part that will never be whole or the same again. 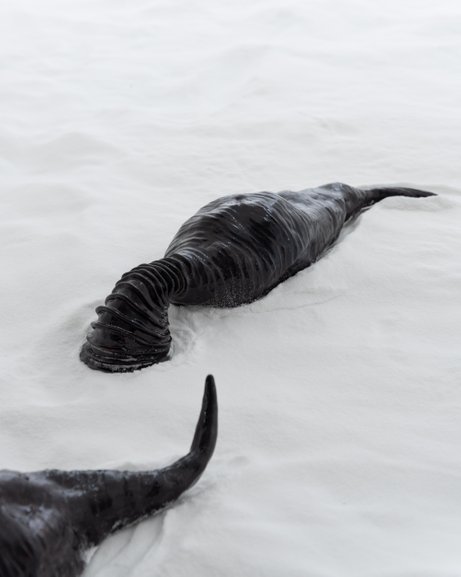 Pretty Hurts (let me put the water in the bowl for your wounds, babe), 2022